The Independent Classic Harley Board

The Independent Classic Harley Board

These notes apply to carburetors which have been in service for some time and have become dirty, full of "crust" in the throttle barrel and are found to be difficult to get adjusted properly. Usually the effect of excessive dirt or "crust" formation in the carburetor throttle barrel, around the throttle disc and in the fuel mixture passageways is to cause the carburetor to have a lean spot off idle. This crust should be removed, particularly when a lean spot comes in at speeds off idle up to 30 M.P.H. with the low speed (idle) adjustment set properly for idling. The idle adjustment should not be set to the very lean side when checking this point, but to a point about five to ten notches rich from the setting where the engine dies from leanness.

HOW TO REMOVE THE CRUST 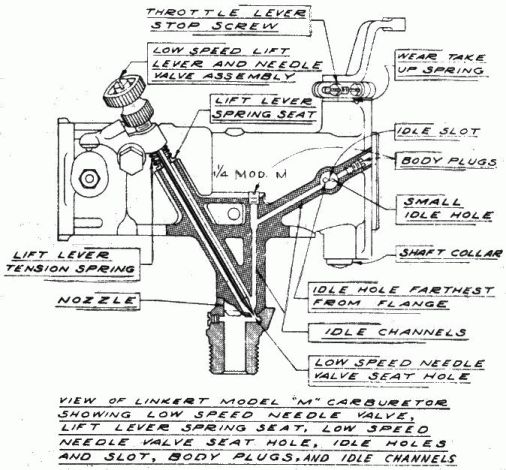 2. Scrape out the caking or crust in the throttle barrel with a scraper or knife, being sure not to cut into the metal.

3. Clean up the throttle disc by rubbing it on both sides on emery cloth on a flat plate and clean the edge of the disc all around, being careful not to round the corners or cut into the metal.

4. Clean out the idle holes in the throttle barrel next to the disc with the proper size drills of clean-up tool set described on last page of this bulletin. See following list for proper sizes for both holes for all models of carburetors. 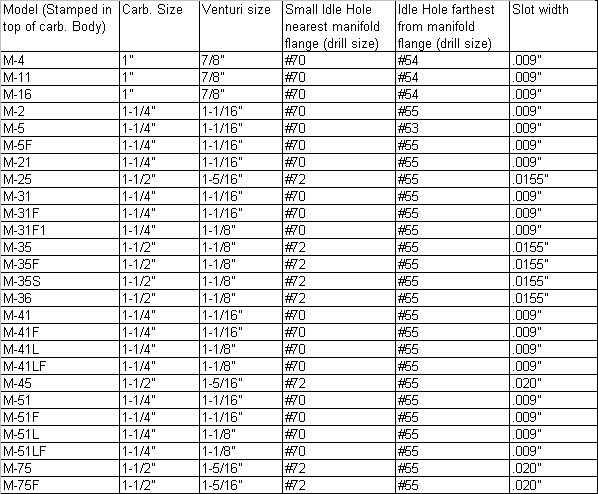 (Model numbers followed by letter "F" or "F1" or "LF" apply only to carburetors used on California Highway Patrol motors.)

6. Clean out the idle channels with the #42 drill. When cleaning vertical idle channel do not completely bottom drill as doing so may damage the low speed needle seat.

8. Blow out all channels and holes with compressed air and wash all parts in gasoline.

9. Re-assemble the parts, being sure the lift lever spring seat or washer is between the spring and carburetor body when assembling the low speed lift lever and needle valve assembly back into place. This spring seat or washer limits the air bleed to the idle system and must be in place, otherwise carburetor cannot be adjusted for satisfactory engine idling.Be sure the throttle disc is assembled in the barrel properly and closes off tight. Have the correct side of disc up or toward the flange and with the lines you scratched lining up with each other exactly. Push up the shaft collar on the throttle shaft firmly against the body before tightening the throttle disc screws. The throttle lever should be clamped to the shaft with the disc wide open and with the throttle lever wide-open stop against the body lug and with wear take-up spring between the throttle lever and bearing. 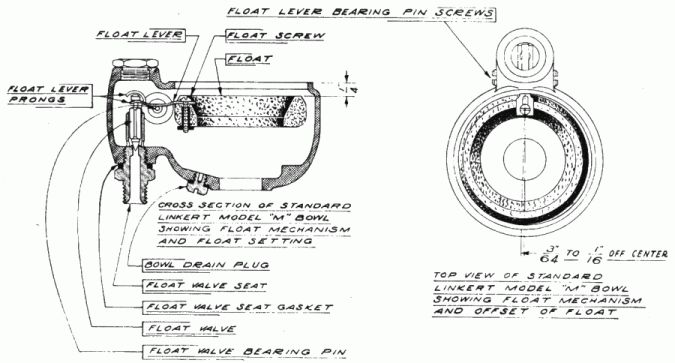 11. If the float is damaged or "logged" replace with a new float. Remove the old float by cutting the seal around the float screw which fastens the float to the float lever. The seal can be cut with a pocket knife. Remove the float screw and assemble the new float to the lever. This should be done with the float valve, float valve lever, float hinge pin and screws, float valve seat and gasket assembled in the bowl. Before tightening float screw securely, adjust as follows: Looking down on bowl with gasoline inlet side away from you, pull float toward you to the limit of slot in float lever and about 1/16" to left of center line of bowl. This provides necessary body clearance. Tighten the float screw and cement the top of the float screw to the float with Dupont Household Cement or with a mixture of celluloid dissolved in acetone or with thick shellac. When the cement has dried thoroughly check the float height and adjust as explained in 12.

12. Check float level, and if necessary, re-set to 1/4". Measure directly opposite float lever with bowl held up-side-down (top of float to top of bowl). When re-adjusting Linkert carburetor float, do not attempt to do so by simply bending float lever upward in some manner, without disassembling from bowl. Re-adjusting in this manner bends and spreads the fingers between which the head of float needle fits, and thus develops lost motion between float and needle. Float and lever assembly should be removed from bowl, and lever then bent as required.Before re-assembling, see that needle head is a good free fit between lever fingers with not more than approximately .003" play. This clearance can also be checked after the lever is assembled in bowl, by carefully placing a small screw driver or a small rod against the valve head in such a position that it will hold the valve firmly against the seat and yet not bind the lever. Moving the lever up and down will then show the amount of actual clearance between the valve head and fingers. If this clearance is excessive the float mechanism will not feed properly. After assembling note that float is approximately square with top of bowl.

13. The bowl drain plug now being used in the Model "M" carburetors can be removed for a quick flushing of the bowl. Before removing this plug turn off the gasoline at the tanks. Be sure to pull up this screw tight when replacing.

These tools are for hand cleaning only. Do not use in power or hand drill, A complete kit including 12 tools is covered by Part No. 12012-58, list price $6.00. If you already have a set of clean-up tools that originally included ten tools, you will need only two extra tools to make your kit complete, part No. 12012-38L and 12012-58M. If you have an earlier kit that originally included only eight tools you will need to complete it the two extra tools just mentioned and also two additional tools, part Ho. 12012-38J and 12012-58K. Extra tools are 50c list each.(All part numbers mentioned in this article are H-D part numbers.)
Top

Thanks for posting that info. However it is all in the documents section on this site and most of the info is downloadable as a PDF on here as well.

Here is what the factory tool kit looks like. Also the bushing replacement tools.

What a display of beauty, fabulous. Hows the repairs goning.

Repairs going slowly, very cold here and about 4" of snow on the ground (and inside the damaged buildings!)
Top

Hope your repairs are progressing.
Top

I sincerely hope that anyone actually rebuilding his own Model M already has and understands this information. Palmer also has some good repair ideas (which should not be posted, sorry).

Step #1 is "Is this the correct model for my engine, or at least the one I wish to use?" Many, many carburetors are physically interchangeable but will not operate properly.
Top
Post Reply
6 posts • Page 1 of 1